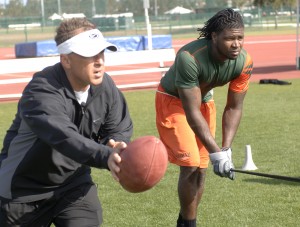 Coach Tom Shaw has more than 25 years of experience in performance training for pro football, baseball, basketball and soccer players, including some of the biggest names in the NFL (Tom Brady, Reggie Bush, Peyton Manning, Eli Manning, Chris Johnson, Santonio Holmes, etc.). In all, Shaw has worked with 122 NFL first-round draft choices, including 10 No. 1 picks, and nine Super Bowl MVPs.

Shaw grew up in the Tampa Bay area and is a graduate of Central Michigan University. He went on to complete his Master’s degree at CMU and later completed course work toward his Ph.D. at Florida State University. He was the assistant track coach at Florida State University for eight seasons before becoming the speed and conditioning coach for the New Orleans Saints for six seasons. He later held the same position with the New England Patriots during their run of three Super Bowls.  Shaw is also a Nike SPARQ Master Trainer.

After his performance training operation in New Orleans was displaced by Hurricane Katrina in 2005, Shaw moved his operation to ESPN Wide World of Sports Complex in 2006 and has continued to train marquee NFL Draft prospects and NFL veterans year-round.