LAKE BUENA VISTA, Fla. (Oct. 1, 2011) – Anton Van Zyl from Ft. Lauderdale, Fla., wasn’t shy about going back for seconds at the Disney Wine & Dine Half Marathon on Saturday night. After winning the inaugural event a year ago, Van Zyl returned to Walt Disney World and gobbled up another Wine & Dine Half Marathon victory in the largest nighttime half marathon in America. Carrie Majeranowski of Cocoa Beach, Fla., crossed the finish line first among all women.

Van Zyl, 38, once again fought off challengers before comfortably crossing the finish line in 1:13:14 – more than a minute ahead of his winning time from last year. Adam Siepiola of Garden City, NY was second (1:13:49) followed by Rolando Cruz Castro of Puerto Rico (1:15:41).

“It’s awesome. It was totally unexpected,” Van Zyl said of his repeat victory. “I saw a lot of nerves on the starting line. But (this is an) awesome, awesome feeling. And this is the greatest.”

Once she broke away from the pack, Majeranowski, 34, had little trouble getting to the finish line before any other woman. Her time of 1:26:10 was more than a minute ahead of second-place finisher Stephanie Zammit (1:27:36). Lyndsey Golden was third in 1:28:15.

“(It was) a little slow at the start (because there was) a lot of people,” Majeranowski said. “But one by one I just picked them off. It was so much fun. The crowd was great. Cheered us on great. And all the music. I loved it. It’s my favorite race so far.”

The 13.1 race took runners from ESPN Wide World of Sports Complex at Disney through Animal Kingdom and Disney’s Hollywood Studios before finishing at Epcot. For many of the runners, including Van Zyl, trekking through the theme parks and seeing Disney characters such as Mickey Mouse was a highlight of the race. 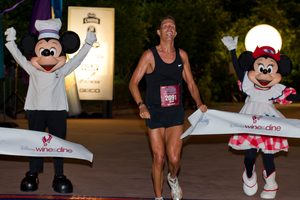 ‘Absolutely awesome going through the different theme parks. It’s just beautiful. It’s not every day that you get Mickey to cheer for you.’
— Anton Van Zyl, 2011 Wine & Dine Half Marathon Champion

The Disney Wine & Dine Half Marathon Weekend marked the final runDisney event of the year and drew more than 17,000 total runners for the weekend, many of whom celebrated their accomplishments with an exclusive post-race party at the Epcot International Food & Wine Festival on Saturday night.

All finishers received a commemorative Disney Wine & Dine Half Marathon medal and had the opportunity to experience the Health and Fitness Expo at ESPN Wide World of Sports Complex. The expo featured the latest running and fitness merchandise, equipment and apparel as well as seminars on training techniques from running experts such runDisney training consultant Jeff Galloway.