LAKE BUENA VISTA, Fla. (Oct. 26, 2011) — The usual drama at the Children’s Miracle Network Hospitals Classic involves who will win the final event of the PGA TOUR season and who will keep their “card” with a finish among the top 125 in earnings for the year. In 2011, there was that … and a whole lot more.

For the first time since 1996, nobody had sewn up the PGA TOUR money crown heading into the final official-money event, leaving the Arnold Palmer Award and a five-year exemption up for grabs. Also up for grabs: The Vardon Trophy for the best scoring average. And because nobody had stood out by winning as many as three events (for only the third time in TOUR history and first since 1991), the PGA TOUR Player of the Year (Jack Nicklaus Award) votes of TOUR players were perhaps dependent on the outcome of the Classic.

In the race for the money crown, Webb Simpson led World Rankings No. 1 Luke Donald by $363,029 – a difference Donald could overcome with a first- or second-place finish on the Disney courses. As for the race for the Vardon Trophy: Donald was No. 1, Simpson No. 2.

After three rounds of the Children’s Miracle Network Hospitals Classic, nothing was settled – although it did not look particularly promising for Donald. He was five shots behind co-leaders Justin Leonard and Kevin Chappell and in a three-way tie for 14th place. Among the players ahead of him: Simpson, four strokes behind the co-leaders.

And halfway through Sunday’s round, it looked even less promising for Donald. Following a bogey on No. 8, he was tied for 10th place, still five strokes off the lead … and two strokes behind Simpson. 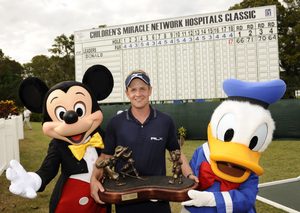 With that, Donald was atop the leaderboard … and when Simpson finished No. 15 with a bogey, he was four strokes behind. Donald was at -17 for the tournament while his nearest challengers – Justin Leonard, Kevin Chappell and Nick O’Hern – were at -15.

Nobody made a “move” on Donald over the finishing holes. While the world’s No. 1-ranked player parred in, the trio of challengers combined for six pars and three bogeys over their last three holes. It added up to a two-stroke victory for Donald over Leonard, claiming the $846,000 winner’s share of a $4.7 million purse, the Arnold Palmer Award for money winnings, and the Vardon Trophy for best scoring average on TOUR.

There were side stories, to be sure. One involved Tom Pernice Jr., who in pro golf terms is a “senior” – at 52 years old, a member of the Champions Tour. But he also played well enough in 11 PGA TOUR events that he came to the Classic at No. 143 on the money list and with enough in the bank that a good finish at Disney might land him an exemption for 2012.

But that was only possible if he could get into the field of 128 players. As Classic week dawned, he was 133rd in the “pecking order” – the fifth alternate; a person who’d only get to play if five players withdrew. Exactly that number withdrew.

Another player to make a huge jump was 24-year-old TOUR rookie Sunghoon Kang. He entered Classic week No. 141 in winnings and left at No. 120 after joining Pernice in the third-place tie.

Biggest winner of all at the Children’s Miracle Network Hospitals Classic was Bill Lunde, a guy who didn’t make the cut and still walked away with a $1 million prize in the winner-take-all Kodak Challenge.

While Lunde played in the Disney parks, Cameron Tringale and Fabian Gomez were trying to make up a two-stroke deficit in the season-long competition by doing something that had been done only five times in 6,835 tries over the previous 28 years: eagle par 4 Magnolia No. 17, the designated Kodak Challenge hole. They parred the difficult hole on both Saturday and Sunday, giving Lunde the biggest payday of his career.