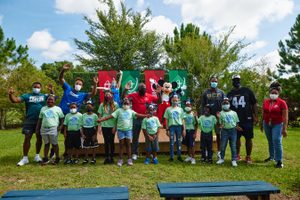 ORLANDO, Fla. (July 20, 2021) – When Buffalo Bills and former UCF wide receiver Gabriel Davis was a child, he didn’t always have the clothes or supplies he needed when heading back to school each fall. Now that he is a top-flight NFL player, Davis is partnering with other NFL players and Walt Disney World Resort to provide back-to-school backpacks for local at-risk children.

Tuesday morning at the Walt Disney World Clubhouse of the Boys & Girls Club of Central Florida in the Pine Hills area, Davis was joined by Nate Evans (Seattle Seahawks), Kenneth Gainwell (Philadelphia Eagles), Tre’Quan Smith (New Orleans Saints) and Martez Ivey (Carolina Panthers), as well as a Walt Disney World Ambassador and Mickey Mouse, to surprise the children, share their stories and hand out the backpacks. Davis’ teammates with the Bills – Matt Milano, Cole Beasley and Dion Dawkins – also donated items, but they were not in attendance Tuesday.

Walt Disney World Resort, which has a long-standing relationship with both the NFL and the local Boys & Girls Club, provided Mickey ear hats and Walt Disney World lunch bags for the backpacks and brought a little magic to the moment with an appearance by Mickey Mouse. Walt Disney World aims to inspire a world of difference through the power of stories, especially those like Davis’s and his mission to set kids up for success.