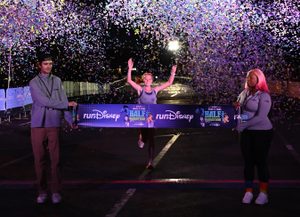 LAKE BUENA VISTA, Fla. (Nov. 7, 2021) – Like a lot of runners across the country who have been unable to compete because of the pandemic, Megan Curham was eager to get back to racing. And her first race back – the Disney Wine & Dine Half Marathon – was about as sweet as it gets.

Curham not only beat all of the women in the field to the finish line Sunday at Walt Disney World Resort, but all of the men too, duplicating the same feat she accomplished at the last Disney Wine & Dine Half Marathon in 2019.

But this time she went one better. After winning by 13 seconds in 2019, she left the field of 11,400 runners in her wake Sunday, crossing the finish line nearly two minutes ahead of everyone else, marking the third time a woman has been the overall winner at a runDisney half marathon (Brazil’s Giovanna Martins did it in 2017). It was also Curham’s third straight Disney Wine & Dine Half Marathon win after finishing first among women in 2018 and overall in 2019.

“I usually go out hard in races, so I pretty much had a gap (between her and the rest of the field) and then it opened more as I went,’’ Curham said.

Curham, who is from Warren, New Jersey, attributed her unprecedented performance to the unseasonably cool Florida weather (temperatures in the low 50s, which is ideal for running) and just being back at her happy place – Walt Disney World.

The race weekend, which involved more than 30,000 runners competing in the 5K, 10K and the Two Course Challenge (running the 10K and the half marathon), was runDisney’s first race at Walt Disney World Resort since the pandemic began in early 2020. It also kicked off the 2021-2022 runDisney race season, which encompasses the Walt Disney World Marathon Weekend (Jan. 5-9, 2022), the Princess Half Marathon Weekend (Feb. 24-27, 2022) and the Springtime Surprise Weekend (March 31-April 3).